A Simple Salt and Its Complex Journey to Your Plate 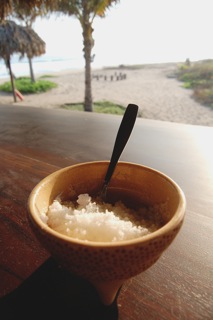 If you’ve visited Playa Viva, then you’ve had a chance to try Juluchuca’s local organic sea salt. A small bowl is on the table at every Playa Viva meal and salt crystals adorn the rims of many of the bar’s delicious drinks.

Using local salt means that the extra pinch you toss on the morning huevos rancheros didn’t travel hundreds (or thousands) of miles to land on your plate. But while this arrangement seems so much simpler, it’s still a pretty complex operation to get that salt from the ocean-side salt pools a few miles away to Playa Viva.

Low prices for bulk sea salt have put that complex system at risk. Farmers are switching to plastic-based, non-organic production methods that risk not only their cultural heritage, but also the local ecosystem. An article (in Spanish) in one of the Costa Grande’s local newspapers highlighted this challenge and the damage it could provoke in the salty lagoons near Juluchuca.

The answer is simple, right? – Stop producing sea salt using black plastic sheeting that contaminates the environment, and switch back to centuries-old methods that use sand and clay to form shallow pools to evaporate seawater.

But low-income producers have an equally simple response:  produce as much salt as cheaply as possible in order to earn enough pesos to feed their families.

In reality, neither response is sufficient. Using local salt doesn’t allow Playa Viva to opt out of a complex global food production system. Instead, it just brings the complexity closer to home and makes addressing the risks that much more pertinent.

A longer lasting solution is to work with the salt producers to adapt to the market dynamics they face. That’s why Playa Viva partnered with I-DEV—to help farmers profit from the benefits that organic, artisanally produced sea salt offers consumers. It’s a multi-year process, but we’ve already taken the first steps. During the next harvest season, which starts next February, a select group of salt farmers will rededicate themselves to the artisanal production methods their parents and grandparents used. This will mean more work and higher production costs, but also means they’ll be able to charge higher prices in the local and international markets.

The group has been meeting weekly for the past month, getting ready for a production season that is only a few months away. They recently elected three of their members to lead them through the next season as they buck a national trend in Mexico and say ‘No’ to plastic-based sea salt production. Members scratched three hash marks each on piece of paper taped to the wall to cast their votes. I was the outside election monitor (first time!), and I can say that we avoided any lengthy legal battles over the group’s leadership.

So what do hash marks on a crumpled paper in rural Mexico have to do with you? Whether you’re eating salt that’s been flown, trucked, and shipped around the world, or savoring that simplest spice from right down the beach, complexity is infused in the food you consume. These artisanal salt farmers are learning how global markets have influenced how they produce their salt, and are opting for a return to traditional methods of production instead.

Watch for kitchen and bath salt products from ‘Sal Mar Azteca’ next year. Or, if you can’t wait to get your hands on some you can order Playa Viva’s ‘Sal Viva,’ an artisanal sea salt produced right up the beach from the eco-resort.