Reposted from Borderland Beat from content developed and distributed by Vision of Humanity’s Mexico Peace Index.  Playa Viva is located in the State of Guerrero which is rated as the Least Peaceful state. It appears that the factor contributing most to this rating is the high rate of homicide (most likely taking into consideration the 43 “disappeared” students). However, taking into consideration the other 6 evaluation criteria, Guerrero would rank closer to the middle.”  While safety is the number one concern of our guest, the overall trend shows an improvement in the Peace Index (and correlated safety in Mexico) and tourist areas such as Playa Viva continue to be safe for tourists.  We hope this provides valuable information to help you make an informed decision about traveling safely to Mexico and Playa Viva. 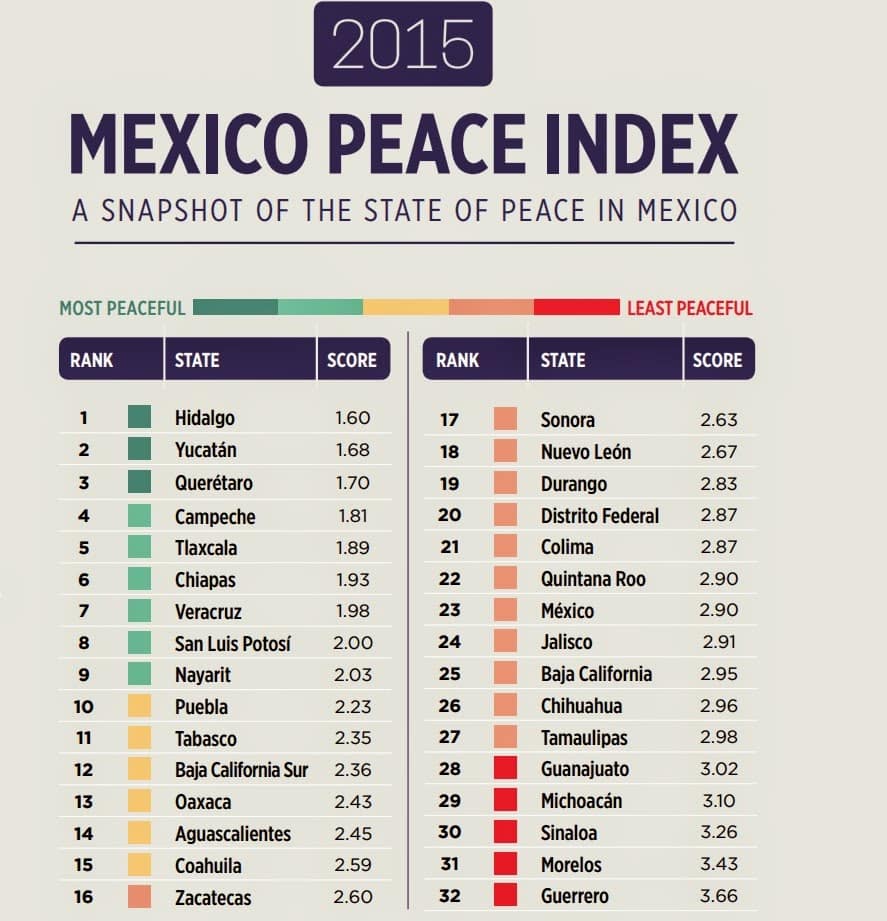 “The Mexico Peace Index, produced by the Institute for Economics and Peace, provides a comprehensive measure of peacefulness in Mexico from 2003 to 2014. This report aims to deepen the understanding of the trends, patterns and drivers of peace in Mexico while highlighting the important economic benefits that will flow from a more peaceful society.” 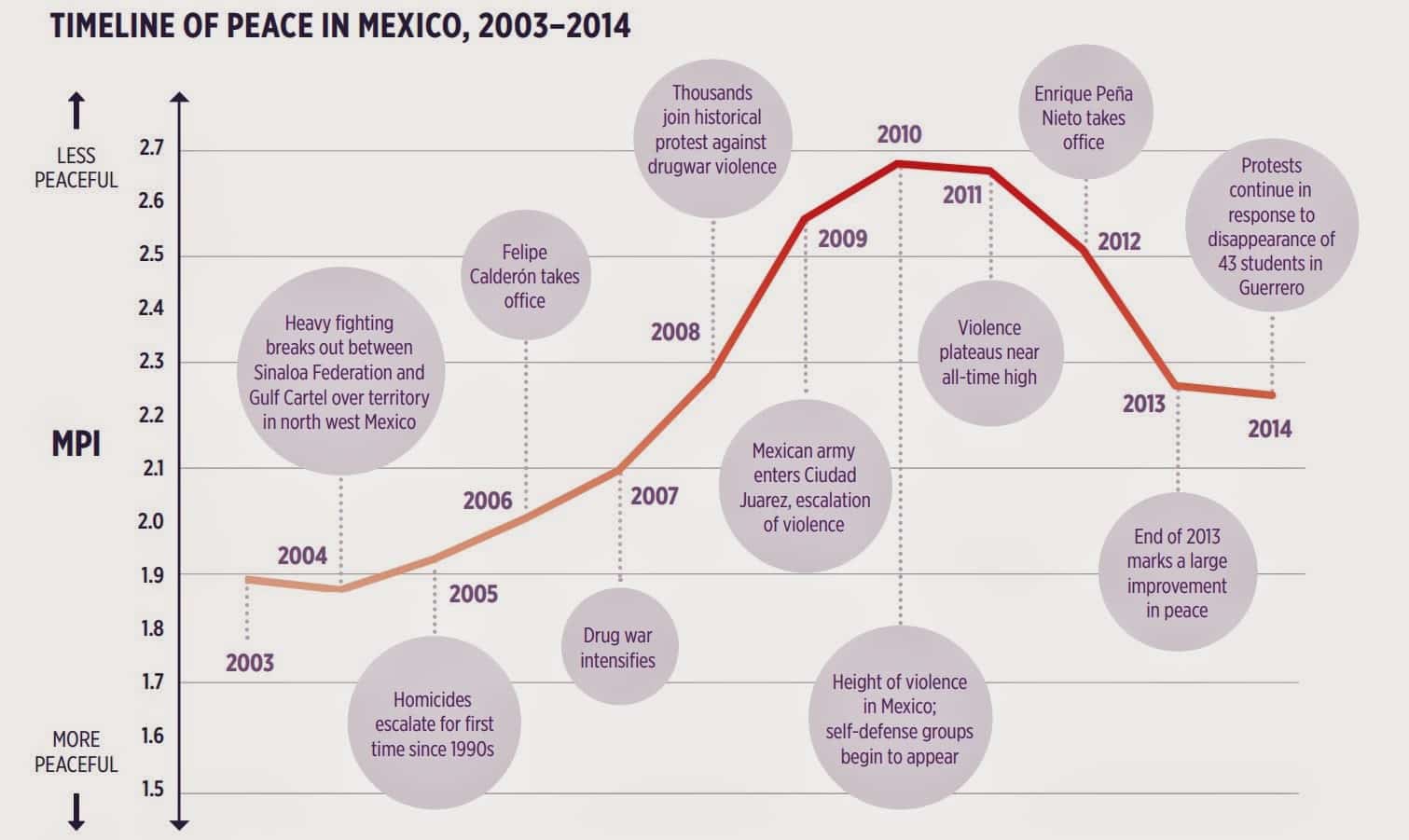 Highlights
“The Mexico Peace Index (MPI) derives from the work of the Global Peace Index, a leading global measure of peacefulness that has been produced by IEP annually since 2007. The Index follows a similar methodology to the United Kingdom Peace Index and the United States Peace Index, also produced by IEP, and defines peace as ‘the absence of violence or fear of violence’.
The MPI measures peace at the state level in Mexico. A key reason for choosing this unit of analysis is that, similar to the United States, Mexico’s state governments have wide-ranging powers allowing them to have a significant impact on the level of violence, therefore the response to violence may differ significantly from state to state.”
The Index is composed of the following seven indicators:
1. HOMICIDE
— Homicide rate per 100,000 people
Source: Executive Secretary of the National System for Public Security (SESNSP)—cases being investigated by the State Prosecution Authorities
2. VIOLENT CRIME
— Violent crime rate per 100,000 people
Source: SESNSP
3. WEAPONS CRIME
— Weapons crime rate per 100,000 people
Source: SESNSP
4. INCARCERATION
— Number of people sent to prison per year, per 100,000 people
Source: National Institute of Statistics and Geography (INEGI)
5. POLICE FUNDING
— Federal Government funding to States for the Public Security Contribution Fund per 100,000 people
Source: Secretaria de Hacienda y Crédito Publico (SHCP)
6. ORGANIZED CRIME
— The number of extortions, drug-trade related crimes, organized crime offenses, and kidnapping per 100,000
Source: SESNSP
7. EFFICIENCY OF THE JUSTICE SYSTEM
— Proportion of convictions for homicide to total homicides
Source: INEGI
“All indicators are scored between 1 and 5, with 1 being the most
peaceful score, and 5 the least peaceful. After the score for each
indicator has been calculated, weights are applied to each of the
indicators in order to calculate the final score.”
Most and Least Peaceful States
With a few exceptions, states in the southern and eastern regions of Mexico are more peaceful than the western, central, and northern regions. Of the ten most peaceful states, only two, Querétaro and San Luis Potosí, are not from the south or the east, while Guerrero is the only southern or eastern state amongst the ten least peaceful.
In the last two years, the most peaceful states, while decreasing very slightly in peacefulness, have had only small changes in rank. There has been a much higher degree of variance amongst the least peaceful states. Guanajuato and Michoacán have steadily declined to now be amongst the five least peaceful states. Juxtaposed to this, many of the least peaceful states have recorded large reductions in homicides and violent crime over the last two years. Tables 2 and 3 show the scores and ranks for the most and least peaceful states, both for the overall index, and each of its seven indicators. 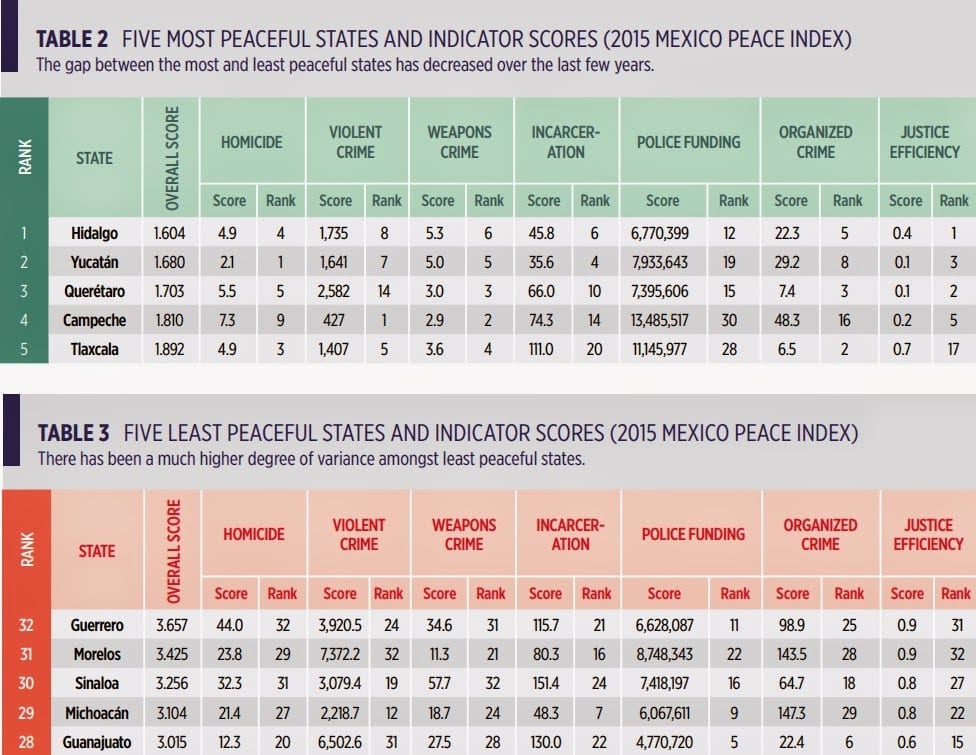