The parents at the local kindergarten in Juluchuca, Mexico have been working to renew the facilities, seeking funds from different sources to re-build the gate and the fence, paint the classroom and fix the leaking roof. 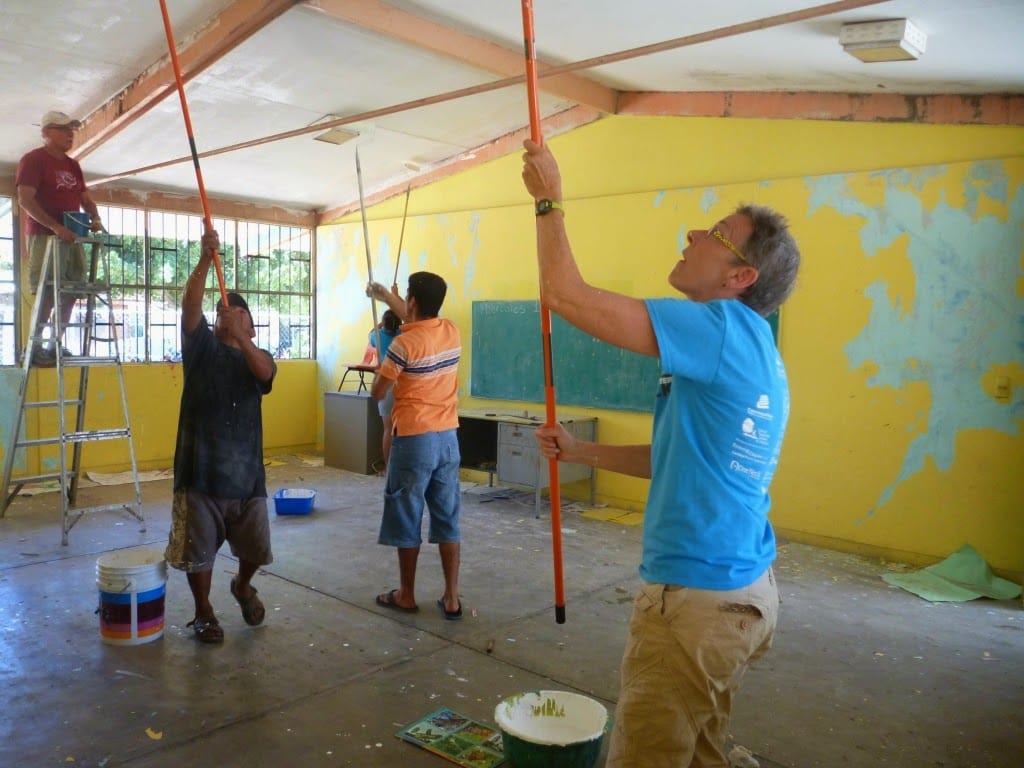 A few weeks ago, the kindergarten parents mentioned their need for paint and rollers to Playa Viva’s General Manager, Julia Garcia.  Julia mentioned the need to Playa Viva guests Charles and Linda who had asked Julia how they could donate to and participate in a community project while on vacation – voluntourism.  Julia told Linda and Charles about the kindergarten and both generously agreed to buy the paint and equipment for the project, as well as offered to help paint.

On Thursday, March 13, 2014, a group from Playa Viva including Charles,  Linda, Fernando and I (two WWOOF volunteers at Playa Viva) plus Miguel (the newest team member at Playa Viva) all went to the kindergarten in Juluchuca to paint! When we arrived a lot of the kindergarten parents were already scraping rough patches of old paint off the walls and completing other pre-painting preparations. Everyone pitched in wherever they could, or with whatever tool was at hand—if you found a free broom, you swept walls or window sills!
The “kinder” (“keen-dare”), as it’s called here, has one classroom for 3-year-olds and another that is divided between the 4- and 5-year-olds. The concrete walls separating the classrooms and administrative office go up to the roof, whereas the outer walls are solid concrete to about 4 ft. high —in other words, they are open air (see photos). There is a large roofed patio (mostly roofed—as the kinder is trying to raise money to complete the roofing for the patio) and a shaded play area with playground equipment. This particular Thursday the children were off school so it was a perfect day for the painting project to be completed.

After a bit, the work hit its stride and began to advance quickly. Unfortunately, we didn’t have enough time to sand down all the old paint, so there were patches where the wall or ceiling would peel (or crumble!) when you ran your roller over it, but little by little the ceilings became freshly white and the walls became sky blue. Teachers, parents, Playa Viva guests, Playa Viva staff and 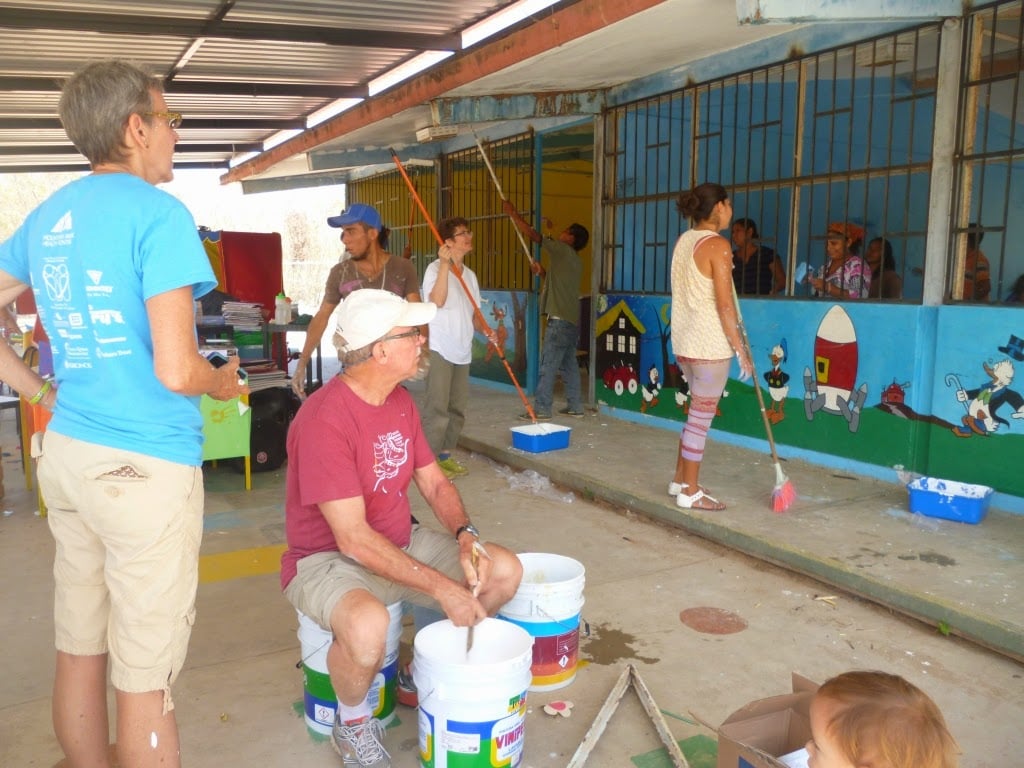 At about 12:30 some of the women told us it was time to come eat—they had brought us plates of chicken with mole colorado and rice, as a way of thanking us for our help. During lunch we chatted about the school with a couple of the moms of children and with one of the teachers. They explained how difficult it is for them to get  funds needed to repair the school due to the slow Mexican government bureaucracy. They commented about how unbelievably fast they had been able to obtain assistance via Playa Viva and guests Charles and Linda —they had mentioned the project to Julia, and in just a short time they had paint, rollers, and even some more hands to help with the project execution.

When we asked how long it had been since the rooms had been painted, we got a surprising reply: it had only been about a year! One of the teachers then explained that every year, during the rainy season (June-September) the classrooms leak, and the paint gets ruined. They had applied for government funding to have the roof waterproofed, and were informed that funding was on its way…however, the latest news was that only a portion of the requested funds would probably arrive and not until July – just as the rainy season starts! That would clearly be too little too late to save the nice new paint job.

The teacher further explained that they had been told they would receive $3,000 Mexican pesos (about $250 U.S. dollars) for the project. Based on this level of funding the waterproofing would not be sufficient. They would have to adjust their project so the initial funds approved would be used to cover the highest point of the roof with a 5-year waterproofing product, with rest of the roof only getting a 3-year waterproofing.

After the lunch,  we all went back to painting (more detail work now) and helping them begin to move the classroom furnishings back into place. At least 20 parents were on hand, along with the teachers and principal, who thanked us again and gave us a round of applause for our help. We applauded their effort and determination in return.

When we got back to Playa Viva, the other guests asked us about our morning and we told them all about it, including the conversation we’d had with the teacher over lunch at the kindergarten regarding the waterproofing of the roof. Later that evening, Playa Viva guests Sarah and Jim spoke with Julia about their wish to graciously donate the funds necessary to waterproof the entire roof so that it can be completed before the rainy season starts. I am quite touched by Sarah and Jim’s generosity. Julia will be checking to ensure that the waterproofing project is appropriately budgeted and the funds donated are efficiently used.   Thank you all for giving to the local kinder.

NOTE from Playa Viva Owners: The painting of the kinder is a perfect example of Playa Viva’s core values of Creating Meaningful Community and Transformative Experiences.  From a Social Impact perspective, we see our role as providing a platform for voluntourism and opening doors between guests and donors who in turn provide resources for specific community identified needs.  It is important to us that the community self-identify needs. Furthermore, that the community beneficiaries donate their time (labor) as well as their own form of giving (sharing of food) with the donors and volunteers who came from outside. Finally, we loved hearing about the regenerative nature of voluntourism and charity that spread from Linda and Charles (painting) to Sarah and Jim (waterproofing).  The result, we hope, is a better educational environment for children, a stronger community and an true cross-cultural exchange. If you are interested in donating to the kinder roof waterproofing project or to the Playa Viva Regenerative Trust to the local community – please click on this link to donate via our fiscal sponsor – the Ocean Foundation via the Friends of La Tortuga Viva fund. Thank you all.