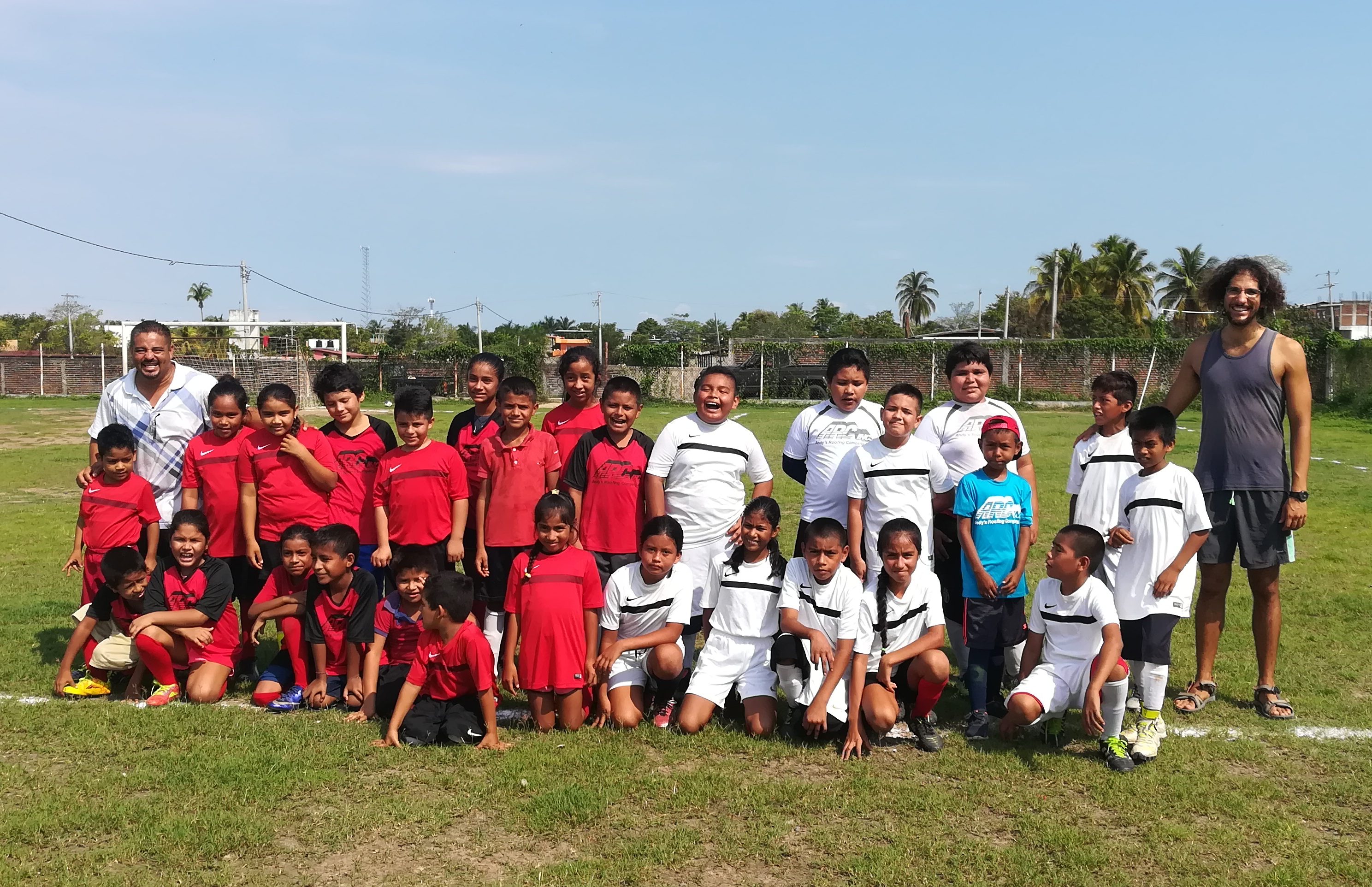 When I arrived to Juluchuca last September to oversee Playa Viva’s social and environmental impact work, I was surprised to find that there were no extracurricular activities for kids, not even sports.  As I became more integrated in the community, I learned that many parents wanted a soccer team for their kids, but weren’t sure how to organize or pay for it. With the support of Johnny and Ariel, both active members in the Juluchuca community, we were able to make that kids soccer team a reality last October, creating a ripple effect for sports, health, and family life in our community.

Many parents wanted a soccer team for their kids, but weren’t sure how to organize or pay for it

Playa Viva played a key role in starting the Juluchuca team. Ariel, Johnny and I took on the responsibility of registering the team and organizing rides. Playa Viva sponsored all of the inscription fees and costs associated with travel, referees and gear. Through Pack for a Purpose, a Playa Viva guest donated two complete sets of Nike uniforms. Our Holistic Host Anne-Lauren brought down a full bag of soccer cleats. These donations helped us ensure that the team was completely free of charge and allowed us to engage as many kids as possible.

After a month, it became clear that they needed to form two teams!

“In the beginning only eight or nine kids would go to practice,” Ariel explained, “Many of them asked how much money it cost to join the team. I could tell the parents were worried about the potential expenses. After our first game, though, they saw that it was truly free of charge. That’s also when the kids realized we were in an official league, got to travel to Petatlan to play, and wear fancy uniforms. Even though they lost that first game 12-0, the next week we suddenly had 20, 25 or 30 kids going to practices.”

Ariel and Johnny held practice three days a week and coached the games over the weekend. After a month, it became clear that they needed to form two teams, Juluchuca A and Juluchuca B, the former comprised of older kids ages 9 to 11 and the latter comprised of younger kids ages 6 to 8. Both teams are co-ed, with a fairly even split between girls and boys.

Shows the impact that Playa Viva can have in our community when we are aligned with what the community wants and needs.

Ariel explains the impact that the team has had on the kids. “It is incredible to see how much they have improved and learned. Many of them started off afraid of the ball, unsure how to kick it or trap it. Now they are confident, more fit and play better together as a team. They still have a long way to go, but I can see how much they are learning, how much fun they are having and how this will help them later in life. They have to work out conflicts, trust one another and exercise discipline. That’s not always easy.”

Inspired by the kids, a group of teenage girls have now formed a women’s soccer team with over 20 players.

As part of Playa Viva ́s social impact work, we are constantly looking for ways to contribute to community education, health and nutrition. By engaging kids in sports, we are helping them get fit and learn about healthy bodies. As a coach, Ariel often talks to them about the importance of nutrition, health and staying away from drugs and alcohol.

The youth soccer team has had many ripple effects throughout town. A group of teenage girls inspired by the kids have now formed a women’s soccer team with over 20 players. They practice twice a week and have games on weekends. Parents have gotten involved as well. It’s not uncommon to see moms go to the field to walk laps while their kids practice. Even the dads go to their kids ́ games to cheer them on.

As one parent explained to me, “Most dads are not very involved in their kids lives. But with soccer they are taking much more interest.”

The kids league ended in June but will start up again in a couple of weeks. Other rural communities have expressed an interest in joining the team or creating teams of their own. We hope to continue the momentum by organizing sports days in town with kids from our other impact communities up in the mountains. We plan to continue to engage parents in topics of health and nutrition. We’ve seen that together we can enjoy soccer, support family life and connect as a community.

Playa Viva also paid for a volleyball net at the soccer field. On any given day, there may be 50 to 60 people out on the field playing soccer, volleyball, or doing some other form of exercise. Ariel hopes to build a new outdoor Ninja gym in the fall using recycled materials. This engagement opens the door to have bigger conversations about health, nutrition, parenting and community life. It also shows the impact that Playa Viva can have in our community when we are aligned with what the community wants and needs.

If you would like to support these types of projects, either during your visit, or from afar, please contact me.

They Are All Stars!